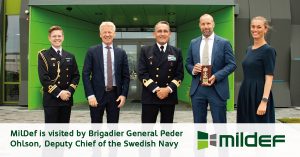 Earlier today, Brigadier General Peder Ohlsson visited MilDef HQ in Helsingborg. The purpose of the meeting was to discuss future needs from the Navy with focus on tactical IT, digitalization, and effective logistics.

“We are proud to serve the Swedish Navy with tactical IT”, says Björn Karlsson, CEO MilDef Group. “Today we got the chance to show the Deputy Chief of the Swedish Navy a new technology concept that we believe has game-changing potential.”

During the meeting, General Ohlsson also took the time to inspect the production and meet with MilDef staff.

A warm thank you from team MilDef for a very positive meeting.